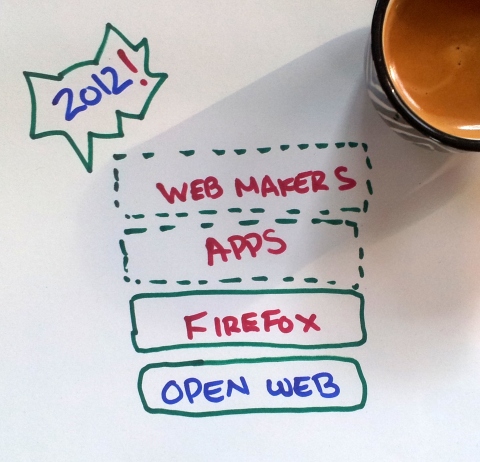 When I first got involved Mozilla three years ago, there was already much to be proud of. Here was a global community of people who had not only won hearts of millions with an open source browser, but that had also helped save the web in the process. This was something huge.

However, the web has changed since then. It faces new challenges. The biggest of these challenges snapped into focus for me in 2011: we’re moving from a world where the web is an open and exciting platform where anyone can make anything to a world of elegant consumption shaped by just a few big players.

My excitement is rooted in Mozilla’s plans step up to this challenge in 2012: we’ve got new ideas — and new code — that can stem this tide.

Mozilla’s apps initiative is a good example: we’re building technology designed to open up the app marketplace, making it easier for anyone create, share, use, modify and sell apps using standard web technology. If we succeed, we have a chance to move beyond a world controlled by a few app vendors to one that’s much more like an open bazaar. And, we also get a world of apps based on the same standards and ‘view source ethos’ that the web was built on in the first place. This will be a radical shift.

Possibly just as radical is Mozilla’s webmakers initiative: an effort to move millions of people from using the web to making the web. As a starting point, we’re making software like PopcornMaker and running grassroots learning labs like Hackasaurus, both of which help everyday content creators learn basic web programming skills. Ultimately, we imagine a world where mainstream video and social network sites are built with software that also teaches how the web works, and then invites you to remix it. As the Mozilla Manifesto says, we want a world where everyone is in control of their internet life, where everyone is a webmaker. A big part of Mozilla’s 2012 will focus on build this world.

And, of course, there is much to be excited about in relation to Firefox, especially on mobile. I felt this yesterday as I (finally) updated my very old Firefox for Android to a recent nightly build. The tab experience. The search. The speed. It was all awesome. Which, of course, are nice things to say about a piece of software. But there is bigger meaning: for the first time ever I was actually enjoying the experience of using regular web pages on my tablet. Making sure the mainstream of the web is pleasant to use on mobile sounds like a no brainer, but it’s actually a radical yet difficult mission in a world increasingly oriented to apps. Firefox is taking on this mission.

Of course, these are only three of the things that have me excited. David Ascher, Dan Sinker and Glynn Moody have written about other emerging Mozilla initiatives. And there are many more in the works. The main point here is not Firefox + webmakers + apps: it’s that the Mozilla community is stepping up to the challenges faced by the web in 2012 with new and concrete ideas. And, as a community, we’re doing this with more force and enthusiasm than ever. It’s going to be an exciting year.

You are currently browsing entries tagged with webmakers at commonspace.