We we’re hoping to release the ‘developer version’ of drumbeat.org last week. Unfortunately, this didn’t happen. Last minute fixes combined with delays getting the production server up got in the way. Which is how things go sometimes. 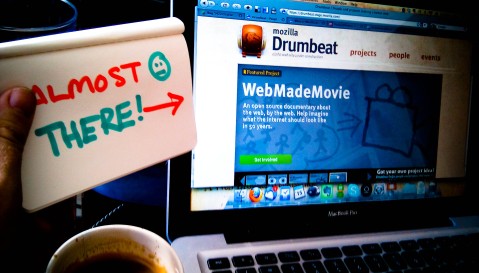 The good news: the staged version of drumbeat.org is far enough along that people can a) propose projects and b) suggest improvements to the site. This is what we wanted to do with the developer version anyways. So, we want to get rolling with this stuff even though we’re not yet ‘live’ on the production server.

Which is to say: we want your help! We need people to add projects, test and submit feedback on the staged site. Specific things you can try if you want to help:

You can provide your feedback in the website feedback thread of the discussion forum (good) or in the Bugzilla www.drumbeat.org component (even better). Or, just post general comments below.

Keep in mind: the goal during this developer phase is to build up the projects on the site and make them strong in prep for a much louder launch of Drumbeat in a month or two.

The production version of the site will hopefully go live sometime this coming week. Accounts and data you create on the staging version should move over automatically.

You are currently reading Drumbeat site live — almost at commonspace.