One of the first things that I took on in my Shuttleworth open philanthropy gig was to help the team develop a ‘theory of change‘. The aim was two-fold: create a simple compass to guide internal decisions and develop a tool to help the rest of the world understand what we’re up to. Basically, we wanted a snapshot of how our collective brain works as a team.

Well, that was 18 months ago. We’ve had at least two all staffs, a dozen small group chats and countless online conversations since. And we’ve produced many iterations, at least one of which I have blogged about here. Not surprising. That’s how strategic planning-y things often go, especially when they are intentionally open ended like this one.

What is surprising was how useful all of this conversation has been in aligning our everyday thinking. Words that we didn’t have before — words we invented for the theory of change — have become a part of everyday thinking and decision making in the office. And, things we’ve believed in for a long time, like transparency and open licensing, have actually become a more real part of our work. Which, in the end, was probably the point.

As I leave the Foundation (last day 😦 today), I promised to do one more iteration based on recent conversations. It looks like this [big version] … 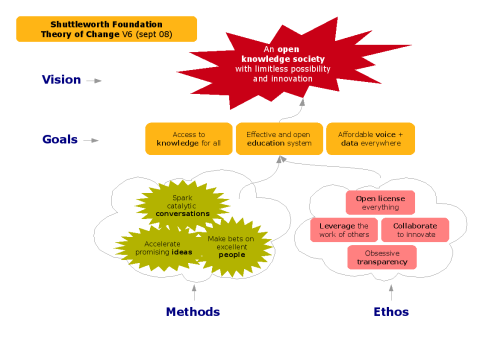 The aim was to simplify as much as possible, just showing the essence. Also, there are lots of changes to some of the core language we are using.

Also, I agreed to write up a series of notes describing each element on the theory of change with a little more detail. I’ve done this as a (pretty ugly) slide deck …

In the near future, our designer Eugene Badenhorst will soon take a shot at making the above diagram real pretty and then doing a small booklet based on the slides.

In the meantime, I highly encourage you to start adding thoughts into the mix, especially if you work closely with the Shuttleworth Foundation. Are we on the right track? If we aren’t, what’s missing? If we are, how close is our theory to our practice? Where do we need to work harder? Where are we full of it?

The idea is that this snapshot of our collective brain will continue to evolve, even after the pretty design. Getting feedback — good and bad —  from people who work with us is a critical part of this. Leave comments here, or send mail to Steve Song (the new lead on this), Helen and I.

§ One Response to Evolving Shuttleworth theory of change

You are currently reading Evolving Shuttleworth theory of change at commonspace.