Hanging with Samoeun Sothyro last week left me inspired and hopeful. Sothyro is is the communications manager at a small environmental NGO in Phnom Penh. He’s also the guy charged with building an online knowledge sharing network amongst IDRC-backed research organizations in Cambodia. These are groups working on everything from natural resource management to human rights law to community internet access. 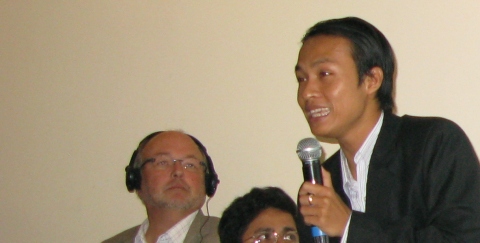 It’s not an easy gig. Sothyro and I met with about 15 of these orgs early this year. While they all had vision and excitement about swapping information, most also felt succeeding online wasn’t going to be easy. In the months since these meetings, Sothyro has rallied support and convinced people they get there if they just focus on simple things.

One of the big barriers in Cambodia remains good, affordable Internet access — even in Phnom Penh. A basic, shared access 1 megabit office connection is $US1200+ a month. This is slower than my cable modem in Toronto and 20 times the price. Along with some colleagues, Sothyro has started talking to ISPs about getting deep discounts if all the members of his buy as a block. I joined him on a few ISP meetings while in Cambodia last week, and it looks like the idea may get traction. If it does, it’s an immediate ‘let’s use the internet more’ win for the research network partners.

Sothyro also wants to create a very simple, bloggish site that shows people it’s not such a big deal to post their own content. He showed me a MS Word mockup. As I was giving him feedback, I showed the new telecentre.org Ning site. A light bulb went on. He had the mockup working on Ning — in both English and Khmer! — in 24 hours. He then rolled it out to partners at a meeting we were both at, making it way easier for people to give feedback. It also showed them that swapping their own information online isn’t going to be that hard. [side niggle with Ning: We found another site that had done Ning Khmer interface translation but could build off what they’d done. The Ning people should make it way easier to share and leverage other people’s localizations.]

Why was I inspired? Because here’s a guy in a place where people are skeptical about the possibility of getting stuff done on online (and with good reason), and he’s just running ahead and doing it with passion. It’s energizing to be around people like this and see them move. Go, Sothyro! And lemme know if you need any help along the way.

PS. This is the last trip I will be doing for IDRC for quite a long while, I suspect. End of an era. Strange.

§ One Response to Inspired in Phnom Penh

You are currently reading Inspired in Phnom Penh at commonspace.